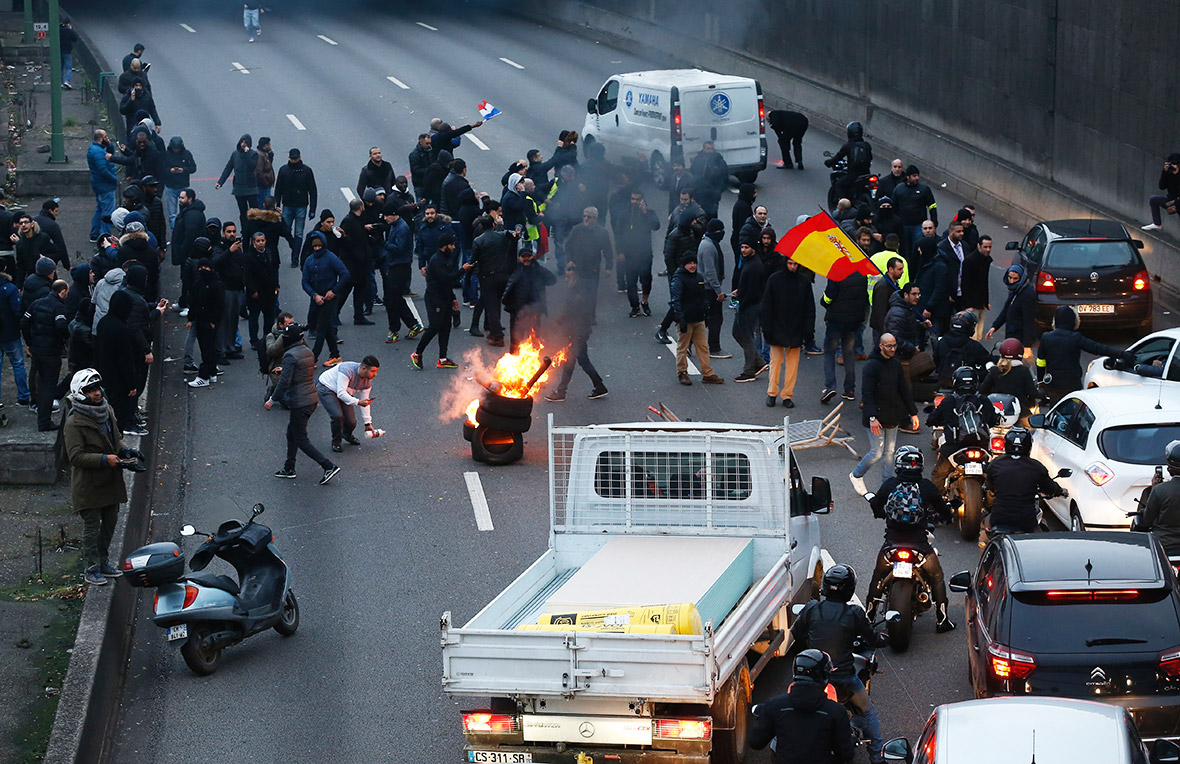 A Tuesday protest complete with bonfire drew riot police in Paris, France, as traditional taxi drivers disrupted Uber services as well as the transit of innocent bystanders by occupying a highway. “It’s just not fair,” a taxi driver who wished to remain anonymous told DarthFranktheTank.com. “We were here way before the more flexible and affordable Uber. If anyone is going to line the pockets of a union by ripping off tourists, making inappropriate sexual remarks to passengers and stiffing citizens by pretending not to have change, it’s us real taxi drivers.” The strikers maintained they would continue to show riders how they deserved to earn driver fares by not working “for as long as it takes.” 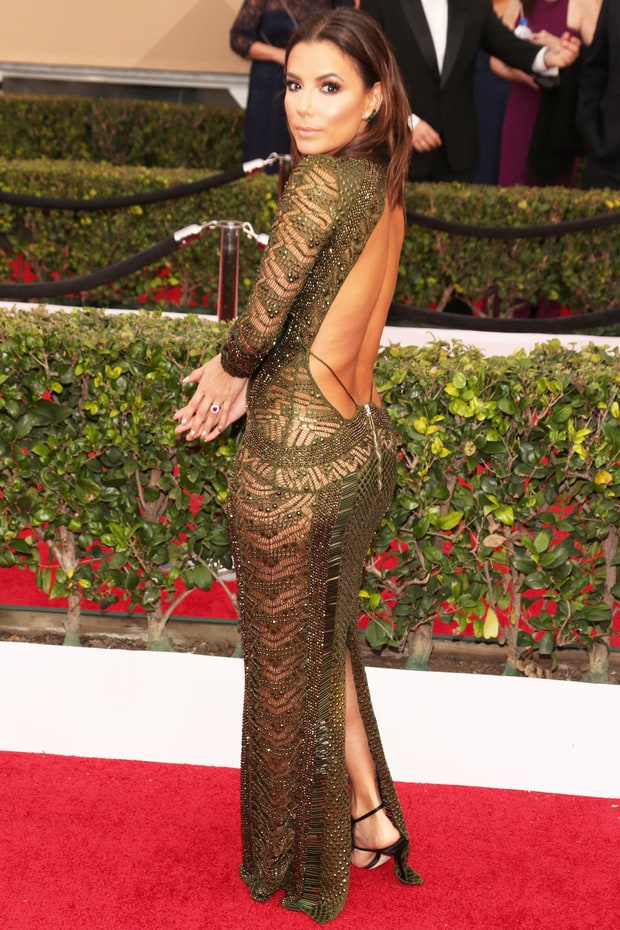 Eva Longoria of Desperate Housewives stunned reporters and viewers with her bold choice of lots of skin, unadorned with frivolities such as underwear at the Screen Actors Guild Awards Saturday night. She accented her bronze bod with see-through green lace strategically draped over her most sensitive areas.

Asked about her inspiration for the ensemble, Longoria protested, “I don’t know, I didn’t make it!”–an inherently false statement, since Longoria personally produces every skin cell visible to the cameras.

Backtracking, the former Miss Corpus Christi admitted, “I guess the inspiration was, ‘Let’s show some skin!'” 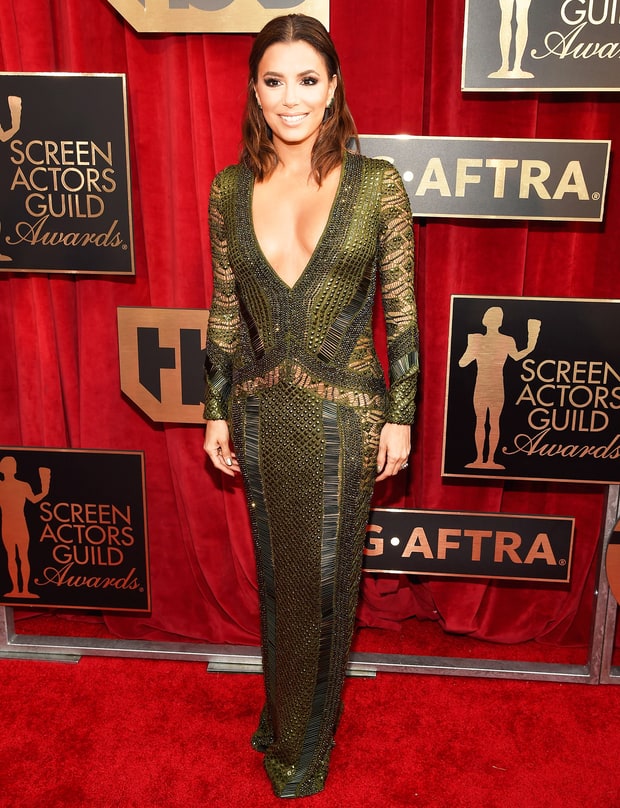 She twirled to better emphasize the long stretch of bare flesh she chose for the back of her outfit. “Check out the back!”

Thanks to Us Magazine Online for the video: http://www.usmagazine.com/celebrity-style/news/sag-awards-2016-red-carpet-see-eva-longorias-sheer-dress-w163013

A Pennsylvania man is in custody after he answered the door holding a shotgun, savagely forcing the cop who knocked on the door to accidentally shoot the man’s daughter through his upper arm.

Donald Meyer used superhuman powers by manipulating the officer serving eviction papers at the New Bloomfield, PA residence into lethally wounding Meyer’s 12-year-old daughter Ciara, using a little-known skilled maneuver known as the “innocent victim through upper arm,” in which an innocent person is shot through the body of another ostensibly innocent person, a tragedy subsequently attributed to the second person.

Ciara Meyer, sometime before her father shot her and himself using a third entity.

“Obviously, I planned out how I could murder my daughter,” Meyer, 57, admitted to reporters. “First, I answered the door holding my illegal firearm. After that I had to improvise, however. I didn’t know a peaceful warrant execution would lead to the execution of my daughter, no pun intended. Fortunately she was standing right behind me and the cop reflexively shot her through my arm, rather than shooting to kill the violent suspect–me, I guess–as he was trained to do.”

Meyer used fake documents to get his gun for provocation. The Government ruled he could not have a gun following his imprisonment in a “mental health facility” five years ago.

The other innocent victim of Meyer’s treachery, Constable Clark Steele, was cleared of any wrongdoing as he shot Ciara in self-defense.

Thanks to my source, CBS News: http://www.cbsnews.com/news/ciara-meyer-dad-charged-in-death-of-daughter-shot-by-constable/

The hugely successful Atlanta-based chicken sandwich chain restaurant Chick-fil-A sustained a mild blow from a generally hostile press recently. Although the Tennessee manager spotlighted in the Business Insider article later reposted to Yahoo! News obliged a homeless man’s request for any leftover food with a free meal and a prayer, the Yahoo! News headline encouraged the anti-Judea/Christian blanket coverage by the media with the following spin:

The multiple inaccuracies in the headline given the facts of the story continued the “Chick-fil-A are evil crazy religious bigots” narrative perpetrated by the mainstream media. Although this slanted perspective was tame compared to most mentions of Chick-fil-A in the news, the article atoned for its tepid affront by concluding with the link:

NOW WATCH: This homeless man had a brilliant response to being excluded from Chick-fil-A’s free-food giveaway

The homeless man in this video is deemed ineligible from winning free chicken for a year because he has no photo ID (available from the Federal Government for free). He responds to Chik-fil-A soberly that they could help by giving him a job.

Now every job I’ve ever applied for, you still had to have a photo ID.

Sammy should become a panhandler! Apparently if you’re good at it you can make more than the average U.S. income…tax-free!

@jaimesunwoo, I welcome your rebuttal.

Smart Money Favors All Candidates, Just to Be Safe

With Stephanie Rawlings-Blake declining to run for re-election, the Baltimore mayoral race is fielding a long list of candidates. The local players are determined to hold political goodies at the end of the day, so the wise ones are funneling contributions to all serious contenders.

“I like them all,” Boston admitted. “They are my friends. Also, no matter which of the four wins, I don’t want to have to buy them on the spot. I need to lay the groundwork for leverage now. That’s what real friendship is based on.”

Thanks to The Baltimore Sun.

Ms. Mosby’s dismissal request states, “Ms. Mosby had every right to expect that a person in Ms. Borzilleri’s position would be loyal without qualification and would publicly support her [Mosby] in full.”

Mosby’s prosecution of the first of the six police officers accused of Gray’s murder, William Porter, resulted in a mistrial. Perhaps Mosby might have demanded blind political loyalty of her jury as she did her staff, whose employment contracts specifically stated “employees may be terminated at any time, for any reason, or for no reason at all.”

Many thanks to The Baltimore Sun.

Despite widespread media attention to the fact that their citizens have been cajoled into purchasing water from a Government-run city monopoly on water, conclusively tainted with heavy metal and bacteria, for the past two years, Flint, MI residents have been forced via tax liens and threats of child confiscation to purchase more harmful water from the Flint River for drinking and bathing. Takeisha Major, 28, protested, “It’s irritating because you never know — at any given time your child could be taken away from you by a source of water. Water!”

While she was referring to her children’s erratic behavior, thought to be caused by the heavy metal poisoning, Major’s worries ran deeper, no pun intended. If she does not pay the water bills for the lethal water quasi-forced down her throat by the local Government, apparently over $650 for November and December of 2015, her children will be taken by the Department of Human Services (recently renamed the Michigan Department of Health and Human Services, at no monetary cost to taxpayers but perhaps exacting a toll on their irony meters. Iron. No metal pun intended.).

Kiki Phillips was driven into foreclosure of her home: despite regularly appeasing the Government goons with over $100 per month, she learned:

“Eventually, in December 2014, her water balance reached $1,800, which was added onto her taxes. This week Phillips received a notice that her house was going into foreclosure.”

However, there is hope on the horizon.

“A spokesperson for the Michigan Department of Health and Human Services suggested that Flint parents need not worry about the agency coming to remove their children if the water gets turned off. Rather, MDHHS’s interest is in making sure children have access to clean water.”

This nebulous response is comforting, Phillips acknowledged, because the MDHHS, like the agency that sold her and her family up the river (last pun), is also run by the Government.