INFECTED!!! The holier-than-thou Pacific Northwest is battling a measles outbreak that has triggered a state of emergency declaration in Washington (State, not cesspool).

All of the 35 confirmed patients suffering from the rarely fatal virus (which according to the CDC was eradicated from America in 2000) were either unvaccinated or have not had their vaccination status verified. We need to investigate that latter group so Twitter can attack the appropriate side.

NPR reports:
Before the vaccine was introduced in 1963 measles was the single leading killer of children in the world. To this day, it still kills 100,000 children a year worldwide, most under the age of five.

Popular locations to pick up this outbreak: if you picked someone up at
Portland International Airport in neighboring Oregon; attended a NBA game featuring the Portland Trailblazers; picked up groceries at Wal-Mart in Vancouver; patronized the Oregon Museum of Science & Industry; or stumbled upon any of the other “four dozen locations” teased by Associated Press.

It’s still a terrible time to live in Chicago. Although thug mayor Rahm Emanuel (below, duck face) mercifully realized last month he would be the city’s first mayor in generations unable to buy his reelection if he didn’t step aside, the “Windy City” will still be frozen in hardship, namely due to dangerous winds this week from the polar vortex.

Specifically, the high temperature Wednesday of -13 degrees F will drop to a “feels like” of -50 when wind is factored in.

ABC7 of Chicago spotlighted our next online outrage mob victim, Jane Bozym, who whined from O’Hare airport:
“I am going to Phoenix [AZ], where I live now, I moved there a year ago. I am a little bit sad that I am actually going to miss the cold, just to say that I lived it.”

The Metra train service has deploy[ed] crews to set fires on switchers to keep the tracks from contracting.

Reportedly, “several inches” of snow fell on the city Monday.

But the race to replace burned-out ballerina Rahm won’t be smooth sledding. USA Today noted the four top-funded candidates, including reported frontrunner and current Illinois comptroller Susana Mendoza (above, gesturing), have all been forced to explain away associations with city council member/ “alderman” (since 1969) Edward “Ed” Burke (below, mafia costume).

The wizened former police officer and attorney, accused of extortion (maximum penalty: 20 years of prison or 5 months of forced residence in Chicago) earlier this month, allegedly [tried] to steer business to his private law firm [Klafter & Burke] from a company seeking to renovate a fast food restaurant[Burger King] in his ward. Burke denies trying so brazenly trying to have it his way.

[T]he FBI found 23 guns in raids on Burke’s City Hall and ward offices. As a condition of his bond, [he] was ordered to surrender the firearms and any others he may own within 48 hours of his release.

Mendoza was married by Burke’s wife Anne, a judge on the state Supreme Court (who was quietly sworn in to a second 10-year term on Nov. 29, the same day her husband’s offices were raided), in the Burke house. She is donating to the Montford Point Marines veterans group $141,550 in campaign contributions banked from alderman Danny Solis, and organizations run by him and his family (including, ironically, this being Chicago–see below–a debt collection firm). Why should we take solace in her dissociation from a different career criminal?

The Sun-Times noted Mendoza’s decision came one day after the Chicago Sun-Times reported that Solis, retiring chairman of the City Council’s Zoning Committee, has spent the last two years wired up to help federal investigators build their corruption case against Ald. Edward M. Burke (14th). Normally, elected officials agree to go undercover only after they themselves have been caught in corruption scandals.

“By waiting until the end of March to return this tainted money, [Preckwinkle] is choosing to use dirty money to get her through this mayoral election. That’s shameful.”

Preckwinkle (above) has called on Burke to resign from the City Council [and] proposed prohibiting council members from holding outside employment.

Preckwinkle said later in the month she would return the money, and characterized Burke as “Susana Mendoza’s mentor.” More problematic may be her advocacy for Ed Burke, Jr.’s (below, mugshot) most recent employment.

[D]espite the fact that Burke Jr. was under investigation on allegations he made inappropriate sexual comments to co-workers at his prior job *in* the Cook County sheriff’s office, Preckwinkle forwarded his resume to the Department of Homeland Security for a promotion to their Cook County Emergency Management Department. Sun-Times reported Preckwinkle admits the recommendation came after she personally met with Burke Sr.

A Preckwinkle official said her office was not aware of the investigation when Burke was hired for the homeland security job.

Sun-Times notes a $10,000 contribution from Burke Sr. to Preckwinkle is mentioned in the extortion charges. Burke Jr. retired from the $110,000/year gig last year prior to a June domestic battery arrest in which all charges were “swiftly” dropped (sort of like his pants, as the arresting officers found him “extremely intoxicated, naked, acting violently, and destroying furniture inside [his] residence” not three hours after police originally escorted him there earlier in the evening), according to Chicago Tribune.

For his part, Burke Sr. has endorsed former Chicago Board of Education President Gery Chico to succeed Emanuel.

Last November, Chicago caught up with Sony to enforce a new 9% cloud tax. PlayStation streaming services just became more costly. The 2015 job-discouraging measure was already kowtowed to by other gaming platform streamers like Xbox. (This is in addition to special Chicago taxes on movies, bottled water and cell phones, according to Fee.) Apparently,

A spokesman for the city’s Law Department, Bill McCaffrey, recently said,”If a business is not collecting the tax where we believe it applies, the city takes the necessary steps and works with the company to ensure compliance with the law.”

When Democratic Mayor Rahm Emanuel approved the additional tax on streaming services, it was done so with the explicit purpose of helping to fund the $530 million increase given to Chicago’s police force.

The city’s amusement tax used to mostly apply to purchases of concert and sporting event tickets. However, the Chicago Department of Finance ruled in 2015 that the tax covered streaming services such as Netflix, Hulu and Spotify. This expansion of the amusement tax is commonly dubbed the “Netflix tax” or the “cloud tax.” In addition to being regressive, it is also likely illegal.

Liberty Justice Center has sued the city, but lost the first round. They are currently appealing to First District Court of Appeals. Labell v. City of Chicago argues the city is violating the Internet Tax Freedom Act, which
prohibits states, counties and municipalities from levying taxes that discriminate against electronic commerce.

LJC notes the mendacious metropolis takes the tax from everyone with a Chicago billing address, not necessarily only from those watching Netflix in Chicago.

Apple (who have reportedly refused to confiscate the tax from users) sued with a similar suit.

The best reason to steer clear of the Midway surfaced earlier this month, when the city was (again) exposed for confiscating and selling for scrap the vehicles of unfortunate denizens violating the city parking sticker system.

Here’s what the city’s own website says regarding the seizure of cars for ticket debts: “The signing over or involuntary surrender of your vehicle to the City does not waive or decrease any outstanding debt you owe the City.”

The city tickets aggressively for sticker noncompliance […], and at rates far higher in low-income neighborhoods, a WBEZ/ProPublica Illinois investigation found.

The city faces a class-action lawsuit over fine increases; plaintiffs accuse the city of exceeding legal caps on parking and compliance tickets.

No word yet if the sinking ship SS Chi-town will try to pull what California did in the news-ignorant haze of the holidays. Their Public Utilities Commission briefly tried to tax text messages after voice call revenue plummeted 33% since 2011. They circulated some sob story that “Public Purpose Programs” now have less confiscated wealth to subsidize low-income residents.

But the Federal Communications Commission forced the state to abandon their latest shakedown, ruling that text messages are an “information service” (like internet and phone) that cannot be discouraged by additional grabbing from a revenue-drunk government. Probably because poor people relying on government subsidies for their phones would be regressively raped by a text tax.


The wireless phone industry argue[d] added fees would put carriers at a higher disadvantage since messaging services like Apple’s iMessage, WhatsApp and Facebook Messenger would not be charged under the proposed legislation.

Additionally, back on July 7, the Illinois House and Senate voted to override a Governor Bruce Rauner (R) (below) veto of the financially-strapped state’s first budget in just over two years.

[According to Chicago Tribune, Rauner had planned to milk the financial crisis from the moment in early 2015 the nation’s least-solvent state descended into “budget impasse”:

“Crisis creates opportunity,” Rauner told the Chicago Tribune editorial board. “Crisis creates leverage to change … and we’ve got to use that leverage of the crisis to force structural change.”] 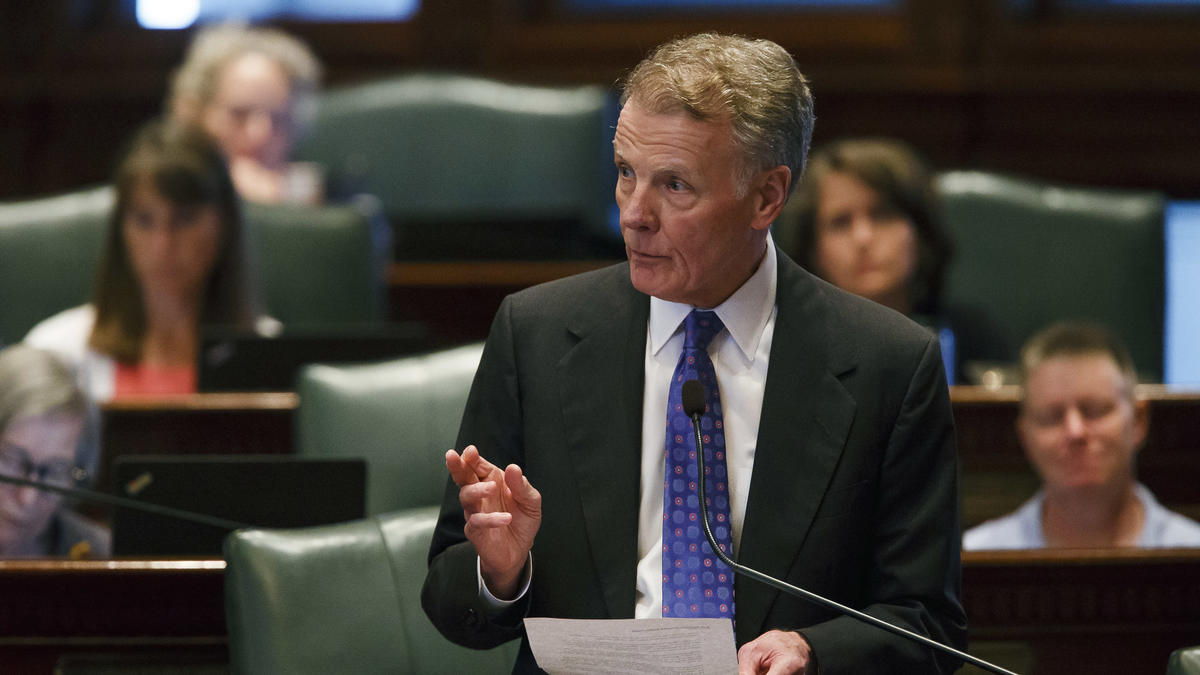 House Speaker Michael Madigan, Democrat of Chicago, rammed through the income tax hike to dent the massive financial hole that is Springfield’s future.

A “bare minimum” 71 state House members voted to override Rauner, including just 10 of the governor’s party. Four Democrats opposed to the budget fix had to change their minds and vote with Madigan.

Similar to the 2016 plan of the state’s preeminent failure, Chicago, the band-aid on Illinois’ busted budget will involve some tax increases.

[T]he plan includes $2.5 billion in spending cuts, including 5 percent across-the-board reductions to most state agencies and a 10 percent cut to higher education.

[T]he Illinois Department of Transportation announced that road contractors can resume working on projects that were suspended days earlier. And the Illinois Lottery announced Mega Millions ticket sales had resumed and the agency has requested that it be allowed to resume sales of Powerball tickets.

Also buried in the budget plan is a measure pushed by Mayor Rahm Emanuel to shore up two [Chicago] worker pension funds, which the governor had vetoed when lawmakers passed it as a stand alone bill earlier this year.

Of note, Rauner quietly vetoed some bills on August 18 that would reportedly “provide transparency” of state-run agencies, as well as let Lake County voters decide if the county board chairman should be elected at-large, establish a state-run workers’ compensation insurance company, and allow those who care for the disabled to work overtime.

Disallowing the final point, Rauner, whose health care experience includes funding the Chicago Red Cross headquarters, noted, “safeguards individual providers from being unnecessarily overworked and ensures that residents requiring long hours of care will have more than one person who understands their needs and who is capable of caring for them.”

The micromanaging would have required agencies to report monthly on their non-submitted bills and estimate the resulting interest payments with which they would drag down the state.

Chicago Tribune reports the city has a net loss of residents in both 2015 and 2016–nearly 20,000 last year alone–the only top-ten U.S. metropolitan statistical area to actually decline in population over that period.

The murder rate probably isn’t helping. Chicago registered the year’s 400th homicide on July 31, for a rate of about two murders per day.

For example, during 12 hours over August 19 and 20, thirty-three Chicago residents were shot, according to Chicago Tribune. Six died.

Over the Independence Day weekend, over 100 were shot, and 15 died.